You are here: Home / Travel / Destinations / Australia / Queensland / Jandowae / Next up was the drive to Jandowae to see the Dingo Fence

So our morning was finished at Jimbour House and so it was time for a drive to the next town of Jandowae for lunch and to check out a few of the old buildings in the town, the dingo fence display, and then on to where the dingo fence starts its journey from Queensland down to South Australia.

It takes around 15 minutes to drive to Jandowae from Jimbour and it is a straight road all the way.

If you are driving from Jimbour House like we were it will add another 5 minutes to the drive, so it will end up taking 20 minutes or so if you aren’t intent on breaking any land speed records and want to enjoy the scenery.

Now Jandowae has had three name changes throughout its history, the first was Jindoweie which was/is an indigenous word for waterhole.

The second variation of name came from the name of jack or John Dowaie who had a grain handling shed on the banks of the creek that was named “Jondowaie Camp”.

Lastly the area was renamed Jandowae when the railway arrived in the area in 1914. 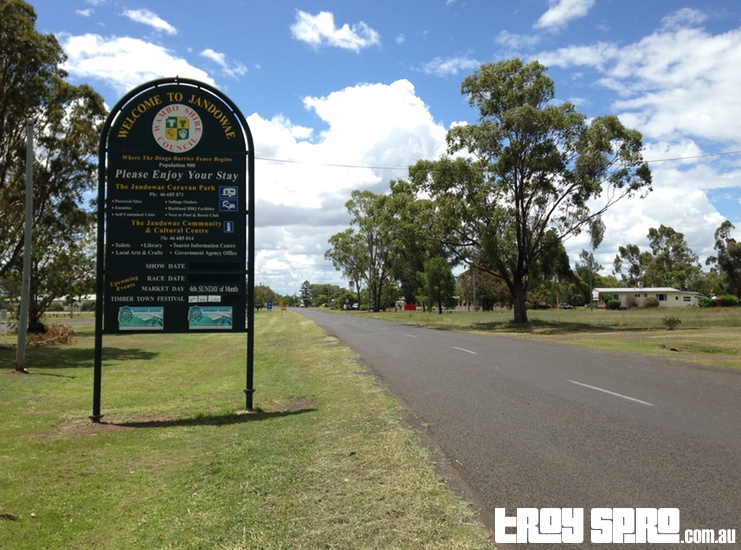 First on our Jandowae to do list was lunch and there is a few places to choose from which include the top pub (Club Hotel), the middle pub (The Exchange Hotel), and the bottom pub (Jandowae Hotel). 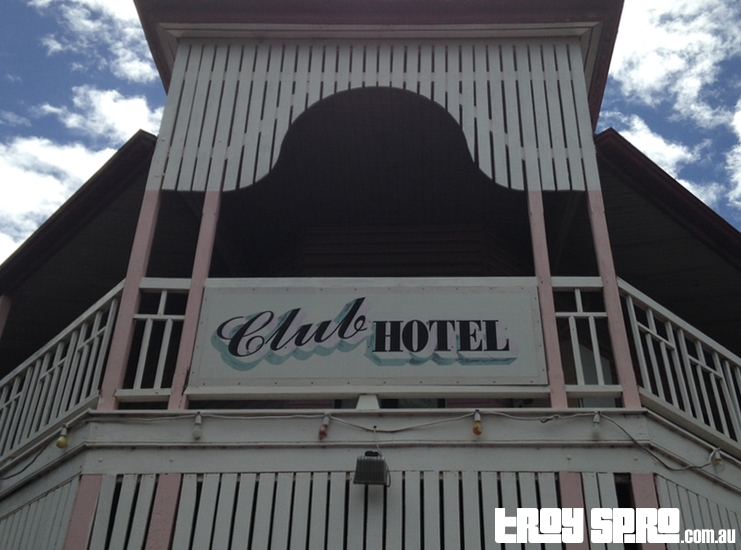 We settled on the Club Hotel, which is also called the “Pink Pub” which was built in 1913.

The meal was good and we were the only people in the restaurant for lunch with a few others in the main public bar coming and going. 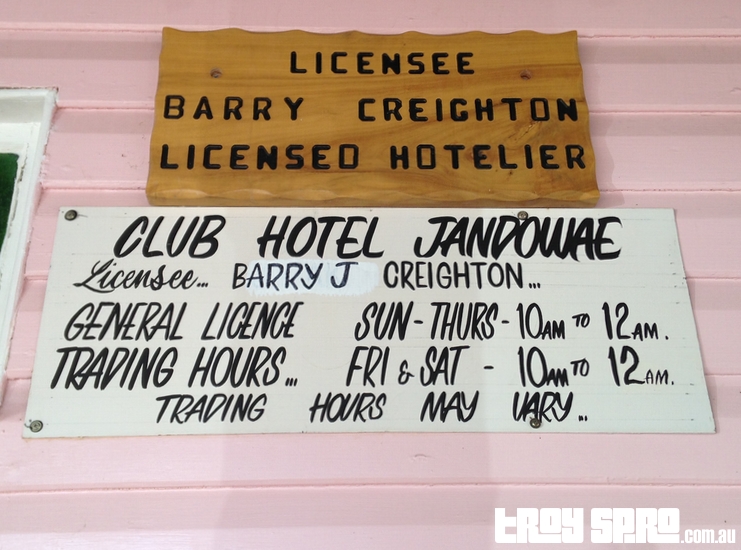 This was good as our kids are pretty noisy and like a lot of room.

After polishing off a nice Queensland country meal and then going through to the bar to let them know we had finished we were out the door and into the car.

The next stop was the 2 metre high statue of a dingo that stands behind a replica of Dingo Barrier Fence. 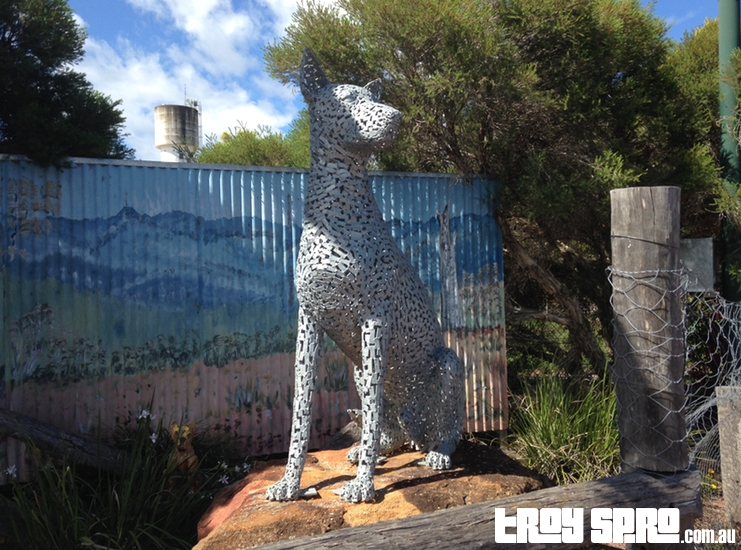 The dingo sculpture is made out of galvanised steel segments and is a tribute to the Dingo Barrier Fence that starts its journey from Queensland down to South Australia in-between Jandowae and Jimbour.

We will be heading there next.

Across the road from the Dingo Barrier Fence tribute is the old Queensland National Bank that later became the National Australia Bank.

Construction on the bank building started in late 1913 and was completed in 1914. 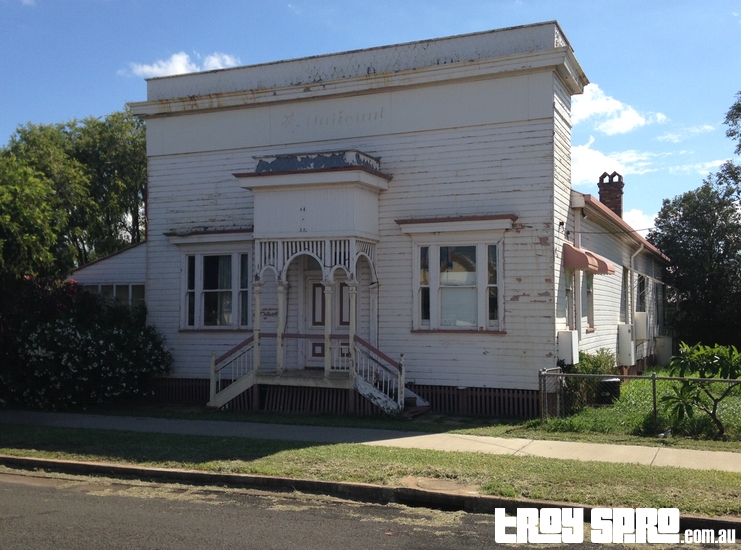 It is a private residence today so you can’t go inside, it just looks like a normal house with a shop front on it.

It would have been good to have a look inside to see the layout and also to see what it had become too as it looks like it needs a bit of work on it to restore it to its former glory days.

One thing you notice about this area is the bottle trees, they line the streets and are so large. 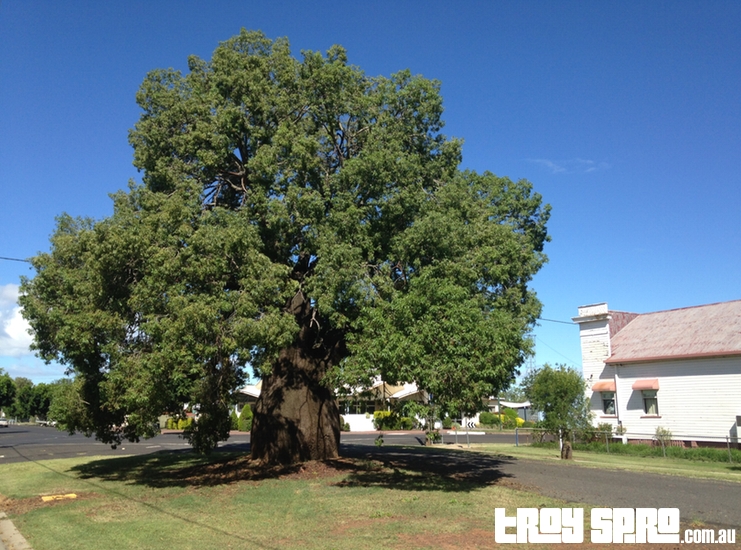 This is the bottle tree across the road from the old bank, this whole street has bottle trees on both sides.

Next stop before we head out of town and start the zigzag drive back to Dalby was Athlone Cottage.

The Athlone Cottage was built around 1890 and was moved to this site for preservation in 2001 after not being occupied at its old location since 1970. 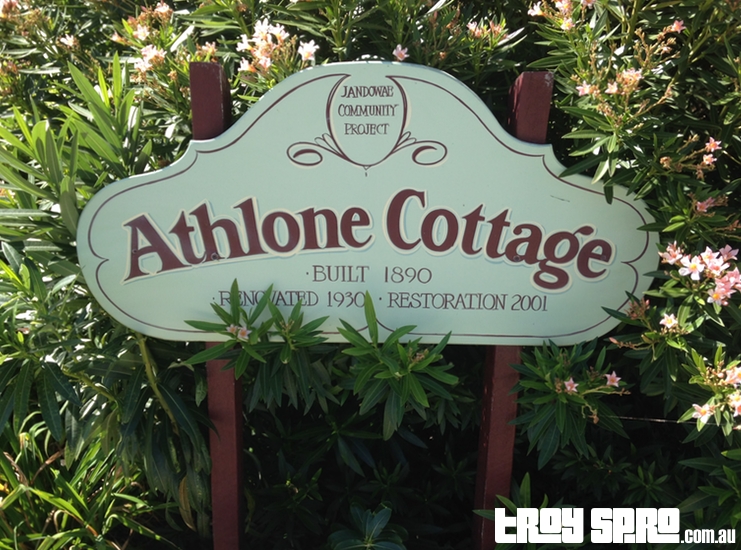 The original Athlone Cottage was located opposite a piece of property called Athlone ironically, this property was near the Jandowae Dam. 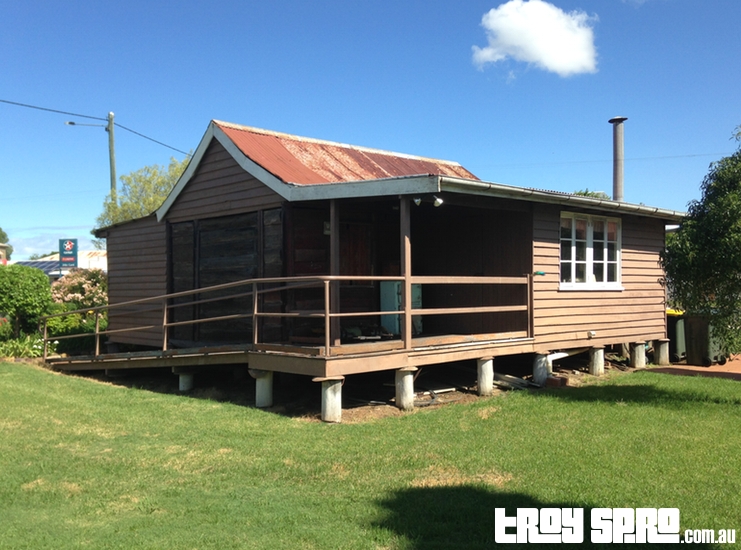 It had work done to it which included adding a bathroom, kitchen and verandah and a floor was added in 1930.

Next we were off to the start of the Dingo Fence Barrier.

The Dingo Fence Barrier is easy to find if you keep an eye out for the signs on the road. 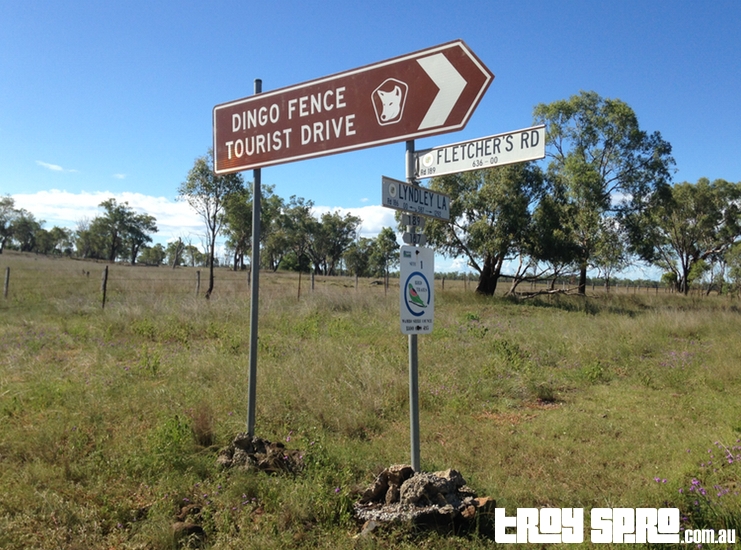 If you are coming from Jimbour or heading back to Dalby, like we were, there are signs like this one to help guide you in finding the start of the fence.

If you type in Fletchers Road Jimbour into your favourite satellite navigation system it is pretty easy to find.

A lot of people search for “Dingo Fence Dalby” too and this brings up a lot of information too in your search engine as well as directions to the fence start point. 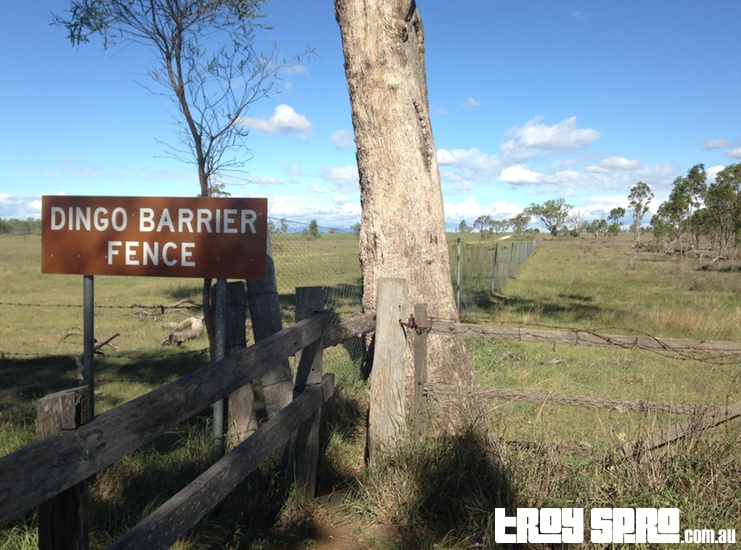 So this is the start of the Dingo Fence Barrier that starts in Queensland and finishes in South Australia.

As you can see in the photos, the fence is nothing but an ordinary fence, but when you travel down the maintenance road for a while you can see how long it is and how much fencing materials it would of taken to build it.

We drove down the maintenance road for a little while just to have a look and to say we had driven along the dingo fence too.

Here are a few dingo fence facts for you.

• The Dingo Barrier Fence is 5,614 kilometres long and its main aim was/is to manage the impact of dingoes and other animals on sheep and cattle grazing in the area it is protecting

• It is the longest man made structure in the world and was first proposed in 1948, as the plaque states, to provide protection from wild dogs and dingoes

• Stemming from the original rabbit proof fences that were established by 1884, the dingo proof, dog netting barriers were being used more frequently after this time and so the transition had started to the full dingo fence barrier being funded and constructed

• The fence varies in its construction materials in different parts but on the whole is mostly an 180cm high wire mesh fence with sections in South Australia that are electrified.

• In Queensland, there are different sections of the dingo fence, so it is also known as the Great Barrier Fence or the Wild Dog Barrier Fence 11 and also, the Queensland Border Fence 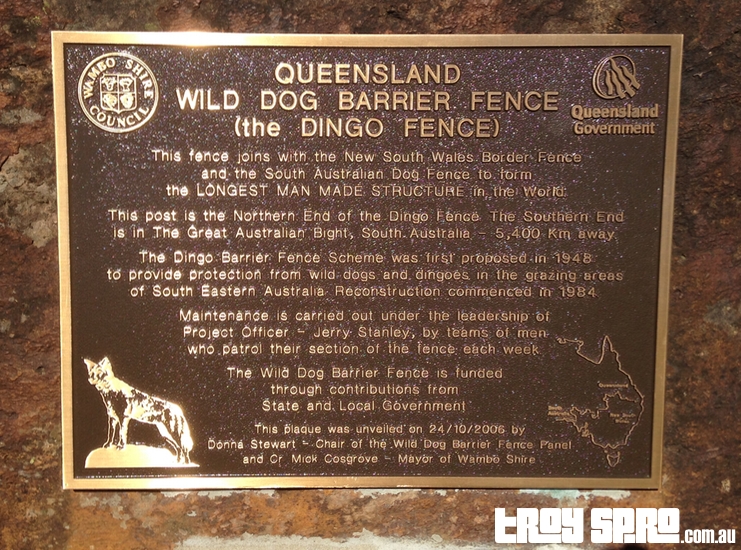 So after taking in the start of the dingo fence, we were back into the car and back off to Dalby.

We went for a walk along the Myall Creek when we got back to Dalby to stretch the legs after being in the car most of the day.

You can park across the road from the Dalby Aquatic Centre and there is a path that follows the creek down towards the Dalby Tourist Park.

I just noticed having a look at Google Street View that the Dalby Aquatic Centre wasn’t even built when they last went through there in 2010, so the new facilities are certainly better than what they had.

After a late afternoon stroll it was time to get back to The Drovers Inn and have some dinner.

Tonight was an easy meal from the supermarket, so an easy to prepare and easy to clean up salad meal. 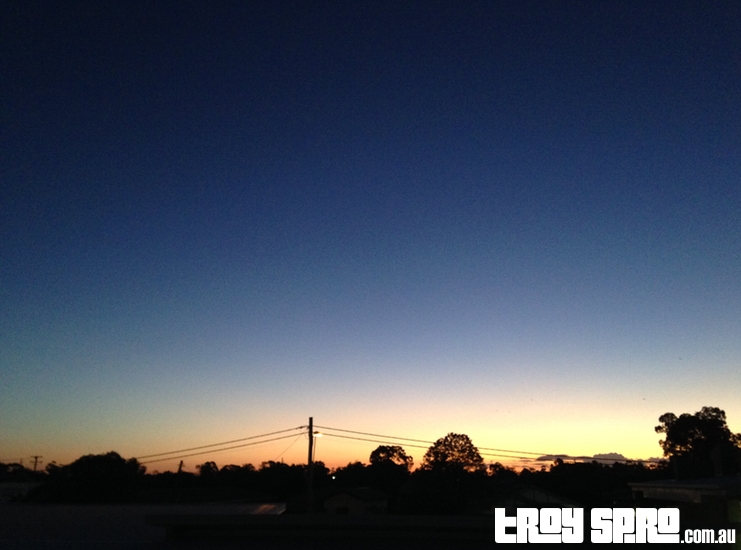 Dalby dusk was beautiful as you can see, it was time for sleep and time to get ready to leave for tomorrows adventure.

We were heading off to Roma for a few nights, with stops in Brigalow, Boonarga, Chinchilla, and Miles on the way. 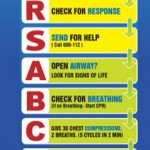 I sat my CPR course today to renew my Electricians License for another 5 years (Which is standard for the Electricians in Australia). I thought I’d write about it as it had changed since my last … END_OF_DOCUMENT_TOKEN_TO_BE_REPLACED 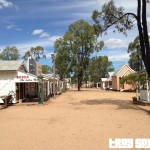 The Miles Historical Village Museum in Miles was a great place to spend the afternoon and we were glad we didn’t waste the time going to the Dalby Museum in the morning. We passed the historical … END_OF_DOCUMENT_TOKEN_TO_BE_REPLACED