So the time had come to say goodbye to Longreach and drive to Winton to check out the Waltzing Matilda Centre / Qantilda Museum.

But first we had to have breakfast, pack up the caravan, and drive out of the Longreach Tourist Park before 10am.

We have worked out not a bad process for this pack up routine by this time of our holiday.

It just involves getting the kids up at 7am though.

And after the big day we had yesterday with the Outback Pioneers Stagecoach and River Cruise, it was hard to get them moving this morning.

It was even hard to get ourselves moving!

So we drove out of the caravan park and headed off for our first stop, Longreach Cemetery. 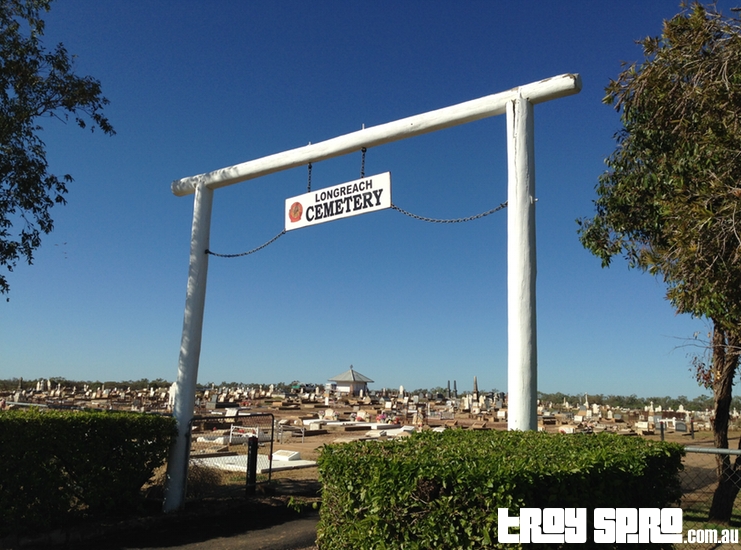 Now the wife and I have kind of a fixation of exploring the old cemeteries when we travel if we have the time.

And we had a bit of time this morning, so why not!

The brochure for the Longreach Cemetery doesn’t have an address on it and also, so I found out the Google Maps address was wrong too ( I have upgraded this listing for Google ). 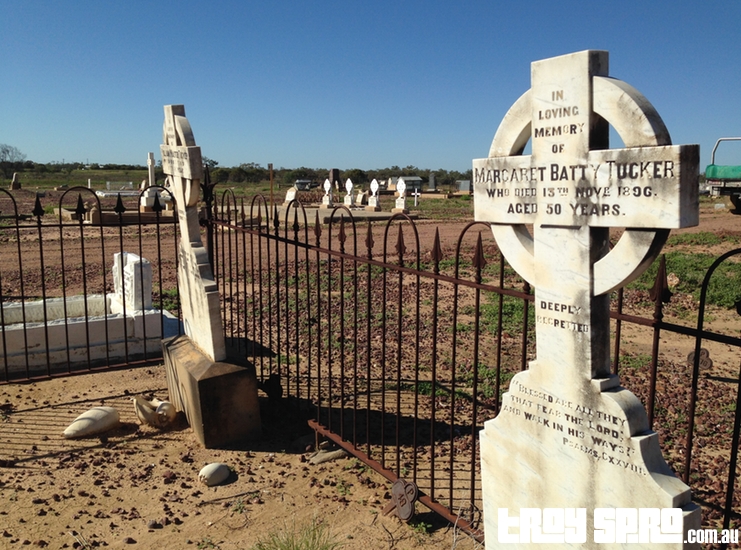 After the Longreach Cemetery and one more stop, it was time for the drive to Winton.

The drive to Winton is flat, straight, and only takes a few hours.

The whole area just out of Longreach is a flood plain and just fills up when they have rain.

You can see why as you drive out of Longreach, it certainly is flat and you can imagine the rainfall creeping across the dry land slowly covering the whole area slowly cutting off access to the town as it rises.

Also there is a fair amount of dead kangaroos on this short drive.

One area in particular just out of town has a massive amount of kangaroos on the side of the road.

So we made it to Winton and found the Matilda Country Tourist Park which is one of three caravan parks in Winton. 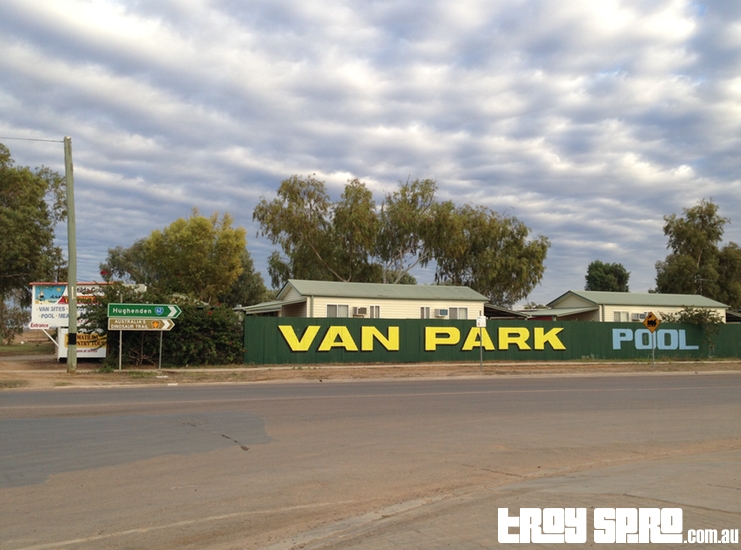 First impressions of this caravan park I have to say weren’t too great for us.

It was adequate though, although a little run down and not too well maintained in spots.

Very dusty too, which is to be expected out this way as well.

So we set up the Jayco and headed off into town to see the Waltzing Matilda Centre / Qantilda Centre and a little bit more of Winton. 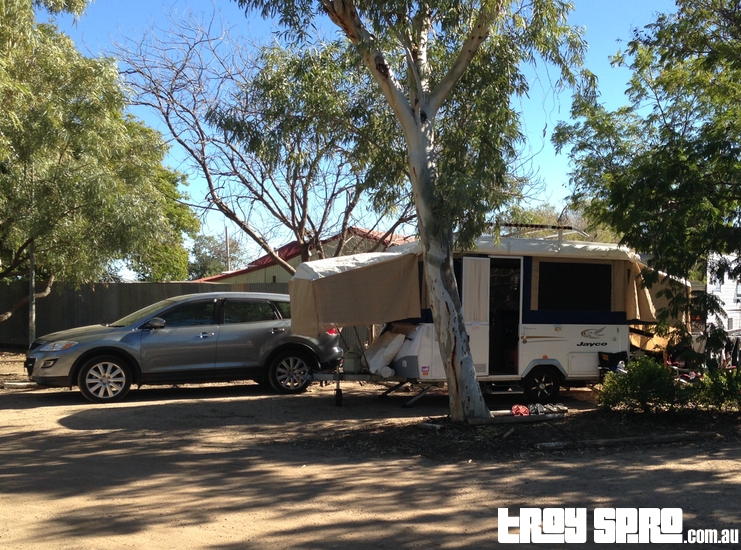 We drove to the main street of Winton where all of the main businesses are in town.

Before we left for our Outback Queensland Road Trip we did a bit of research on the places we were travelling to.

From the websites and Google Search too we couldn’t really find out any current information on where the Waltzing Matilda Centre was at.

Our questions were finally answered and it made a bit more sense after we arrived to the Qantilda Centre.

Where is the Waltzing Matilda Centre?

Currently, as of July 2016 the Waltzing Matilda Centre looks like this photo below. 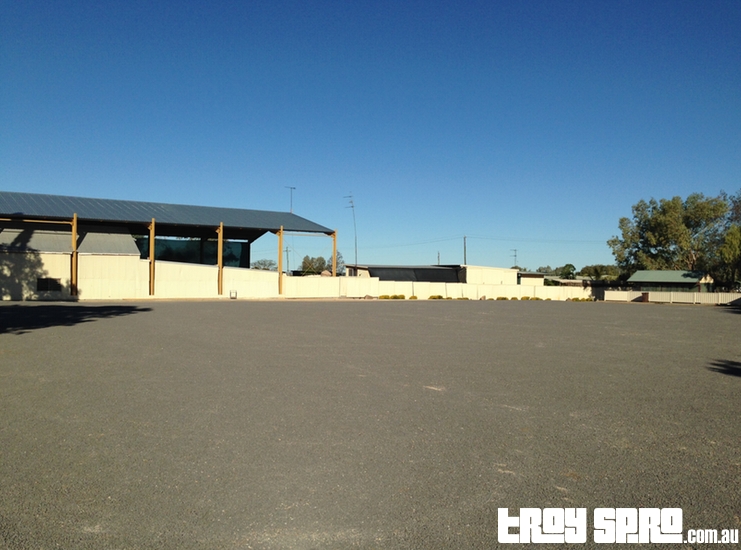 The Waltzing Matilda Centre was destroyed in a fire in June 2015.

The Winton Shire Council has, this year, appointed Brisbane’s Cox Rayner Architects who were also involved with the design of the Age of Dinosaurs Museum buildings too.

The Age of Dinosaurs Museum architecture is amazing so I’m sure that Cox Rayner Architects will do an amazing job.

So our plan for the rest of the afternoon was to have a quick look through the Qantilda Museum and walk up and down Winton town for a while to stretch the legs and get a feel for the town too. 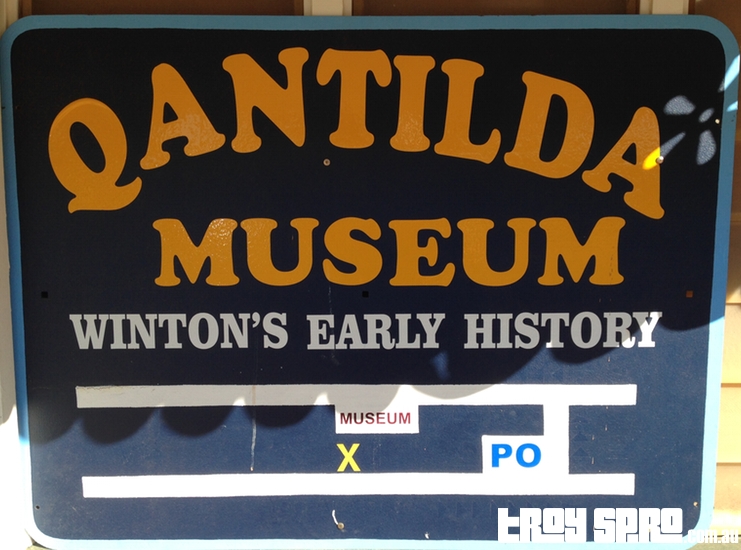 Winton is drier than a dead dingoes donga with quite a few flies and mosquitos around the place too.

This is understandable as we are out in West Queensland.

The Qantilda Museum isn’t too bad and they have done a good job of preserving Winton’s and the surrounding districts history. 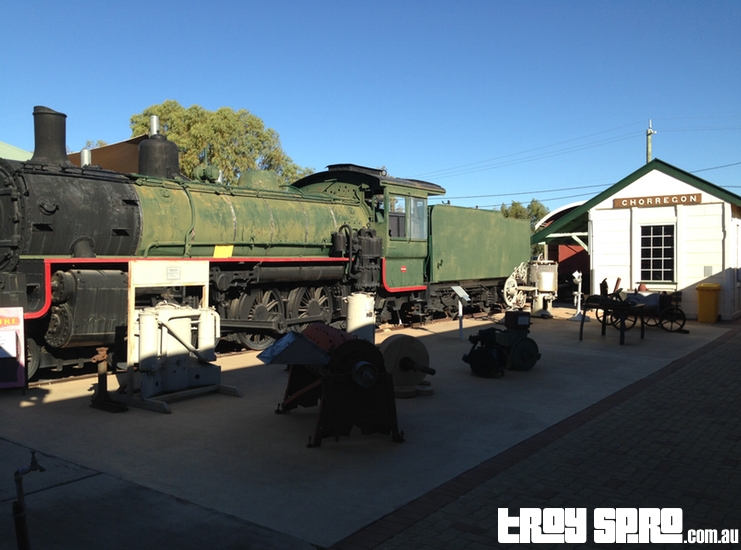 There is plenty to look at and read, even for the kids.

We didn’t spend too much time inside as we had to take a walk through town and also get a few groceries for the mights meal. 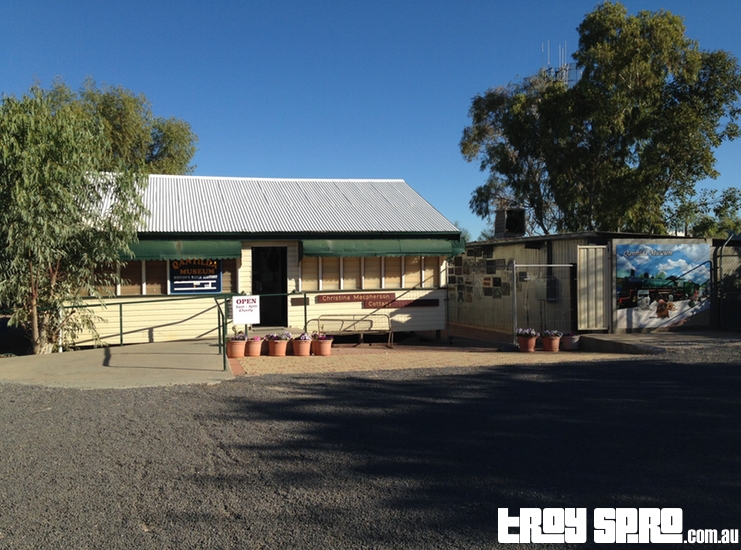 There is a fair bit of history in the Winton township.

The North Gregory Hotel in Winton has been open since 1879 and this is just one of the very old building in the main street part of Winton.

This hotel is huge and is only a short walk to the Waltzing Matilda Centre, Qantilda Museum, The Opal Walk, and the Royal Open Air Theatre in town.

I spoke to a lady at the Matilda Country Tourist Park whose father was the Winton Town Clerk a long time ago.

She hasn’t been to Winton for 48 years after living here before and she said he was one of the men who raced the elephants down the main street when the circus was doing a promo for their upcoming show sometime in the 1960s.

She also said the North Gregory Hotel hasn’t appeared to changed at all over time since she was living in Winton 48 years ago. 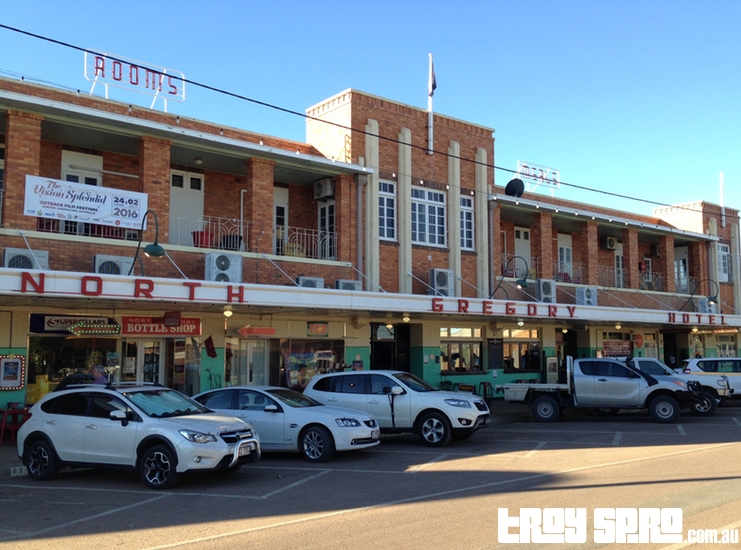 There are many old Hotels and shop fronts along the main street of Winton.

We were in Winton during The Vision Splendid Outback Film Festival.

This is held at The Royal Open Air Theatre which was opened in 1918 and gives you the opportunity to watch movies under the stars in canvas seats.

The Royal Open Air Theatre is also home to The World’s Biggest Deckchair. 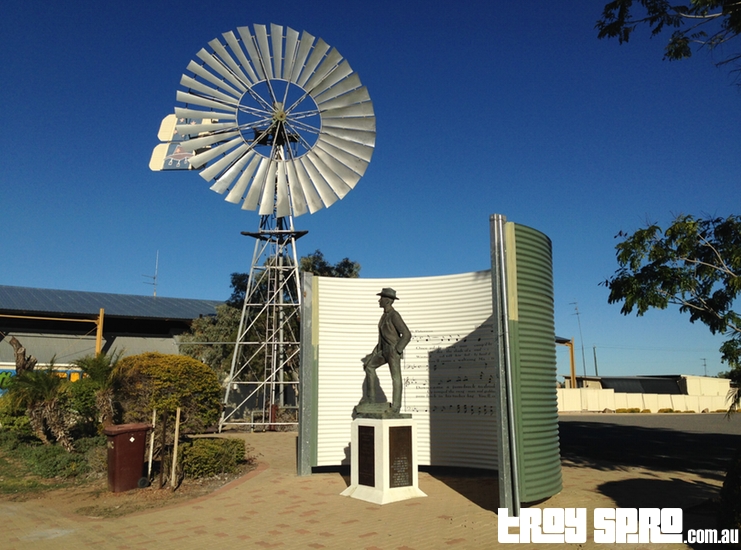 In hindsight we should have gone to one of the film nights while we were in Winton.

But it may not have been too much fun for the kids and an extra late night to make them too tired so they wouldn’t have enjoyed the Australian Age of Dinosaurs as much either.

So maybe next time we are in town.

You may even run into Roy Billing too, he is the Patron of the festival.

We spotted Roy around town too and wondered if it was his helicopter parked out the back of the main street we spotted.

Another thing we found out is tere is only a couple of small places to do your groceries in Winton, and they are pretty expensive.

So you may want to make sure you have ample supplies before you get to town.

We grabbed a few things still on the way back to the caravan park.

Then it was time for dinner, showers, and sleep.

The water in Winton is rather unique for drinking if you have to, and also for showering too.

We were warned about the Winton water before leaving Longreach.

So I made sure the Hawk had a full water tank and you should too.

The smell of the water in Winton reminds me of Rotorua back in New Zealand.

Rotorua is a town in the Bay of Plenty, North Island, New Zealand, just down the road from my home town of Kawerau.

It has a lot of geothermal activity around the town which makes it smell like off rotten eggs most days.

The water in Winton is also every hard to drink, even after trying to give it a go.

The water here comes from the Great Artesian Basin which stretches over 1,700,000 square km underneath the ground.

The Great Artesian Basin provides many people the only reliable source of fresh water through much of inland Australia.

But there is a catch.

The water comes out at a temperature and has to be cooled before being pumped to the town.

The water comes out at around 80 degrees and has to be cooled to 50 degrees before it is pumped directly into the water pipes here.

Many of the houses have cooling tanks that are elevated and so the water gets to a lower temperature and loses that bite to it.

I heard stories while we were here about having to elevate your sprinkler if you were watering your lawn.

This is so the temperature had dropped enough by the time it hit the lawn so it didn’t kill the grass.

So you can imagine what it does to the plumbing pipes in Winton with a mixture of the heat and also minerals present too.

I was doing the dishes one night and found my thongs / jandals were getting wet when I was first rinsing.

I checked it out and found the problem as you will see in the video below.

The smell of the water is very strong in the showers too and you can smell it on your skin after you get out.

Ahhhh well, what can you do? It was time for sleep.

At night here at the Matilda Country Tourist Park there is a distant rumble of machinery, or a train and the sound of cows mooing too.

I wonder if it was road trains being loaded up with cattle? It went for pretty much the whole night. 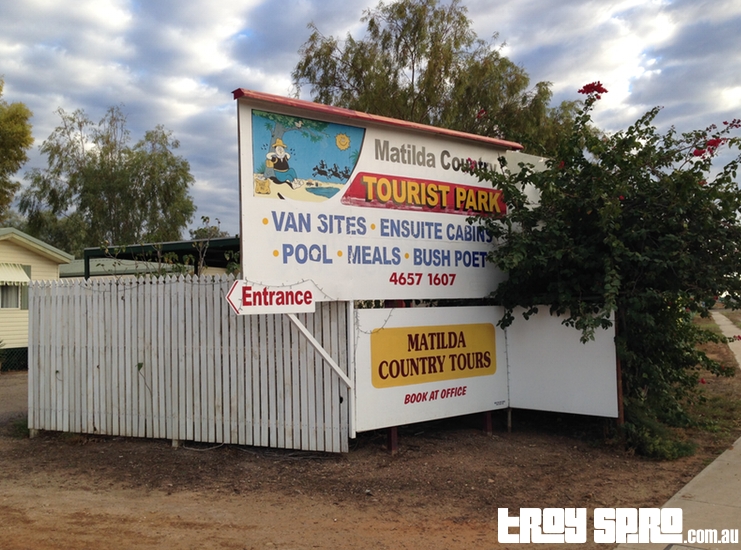 I have a slogan for Winton already after one night, not my own either.

Winton, if you don’t expect much, you’ll love it!

Winton has a few days to change my mind about what I think about it.

So you will have to come back to see what I thought of it after I finish writing about the coming days experiences. 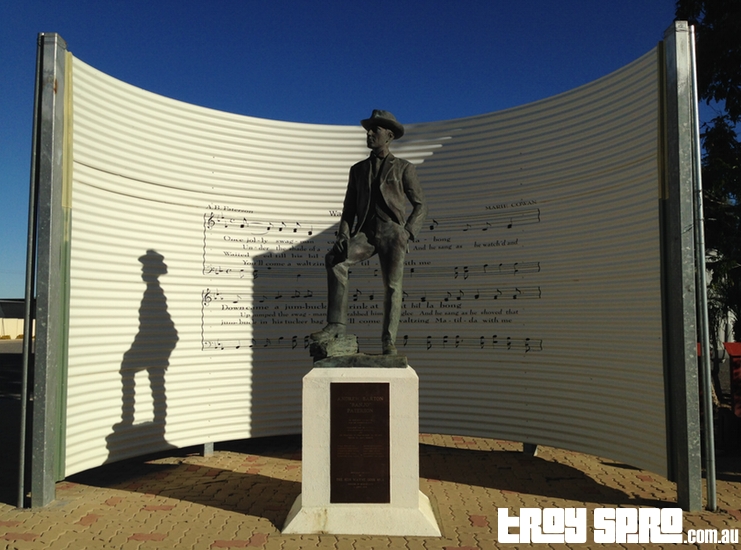 Winton has history, which is good.

It will have the Waltzing Matilda Centre, once it’s built again.

It also has the Australian Age of Dinosaurs Natural History Museum just out of town, which I’ve yet to see.

Also there is the Bladensburg National Park we have scheduled in for a day too. 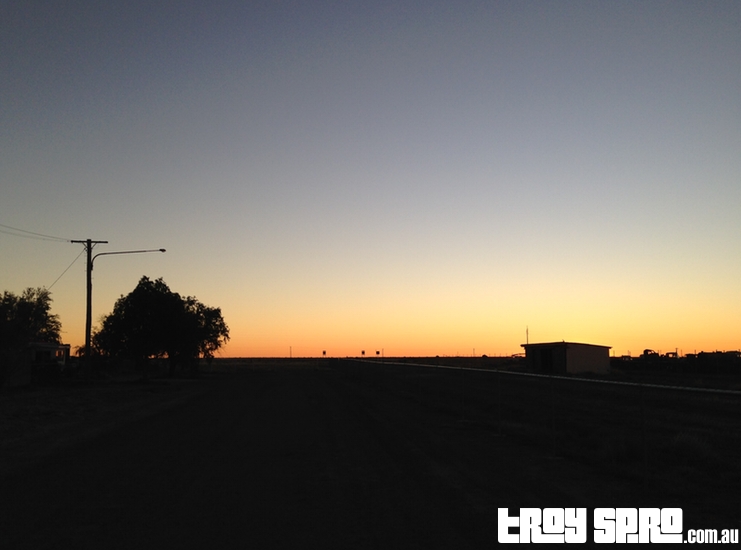 It also has great sunsets as you can see above.

But other than that for people that stay in caravan parks and don’t really get out and do much, Winton is only 2 hours away from Longreach.

If we had our time again, and talking about it tonight.

We maybe would have stayed in Winton one night, and done the Waltzing Matilda Centre on arrival.

Did the Australian Age of Dinosaurs the next day, then carried on to one night at Cloncurry.

And then maybe added an extra night somewhere else on the way.

Again, Winton has a few days to change our minds about what we think about it.

Hopefully it will be all good.

Or head back to the start of our trip here, Outback Queensland Road Trip.

Where did we stay in Winton?

What distance did we drive today?

Or head back to the start of our trip here, Outback Queensland Road Trip. 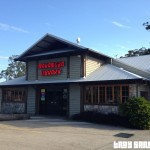 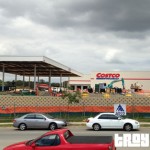 I went down again to Brisbane's first Costco opening in North Lakes today for my Costco construction photo update for the week. It is coming along nicely and if the weather holds off and we don't get … END_OF_DOCUMENT_TOKEN_TO_BE_REPLACED